Jessica Alba, who is a sexy actress, has finally appeared nude in a movie in a shower scene in new film. 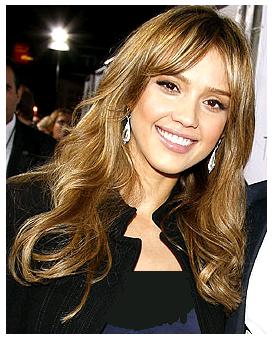 This scene appeared to be only kind of blurry since she’s behind a glass shower door, which you could see here.

The pregnant actress, who respects herself and refuses to do a nude scene unless absolutely necessary, is in a nude scene in her new movie “The Eye” but you cannot see the ‘details’ of her body – just enough to make you want more.

In an interview where she talks about her life, her career, and her new movie, “The Eye”, which you could read the highlights of the interview:

On how does her life will change after the baby is born, the actress replied, “I have to believe that when you have a child and you have someone that needs you and needs your time, you kind of can’t be self-interested anymore and you have to consider that any time you spend away from your child is invaluable. And so I think I’ll just probably be a bit more choosy and not work for two years straight like I just did.”

On what sort of research did she do for a role of a blind person in new film, she said, “I went to a blind orientation center in LA and one in New Mexico. And I lived among people who were learning to deal with blindness, particularly in New Mexico. And I learned how to read braille, how to label everything in the house, and to walk with my cane. I just sort of learned how to exist as someone with blindness.”

On which is more challenging: playing the violin or playing blind, she answered, “Violin was definitely more difficult, because I played a soloist, the best of the best. There are people who’ve been playing that instrument since they were three years-old and who practice eight hours a day who still don’t become soloists. They’re just in the orchestra. So, that was tough for me because I wanted to come off as realistic and as believable as possible in order for the audience to really take the journey with me in this movie.”

On comparing her previous film “Awake” to her new film “The Eye,” she added, “The Eye is way more scary. It’s a horror movie, for sure. Awake is more a psychological thriller about someone who is dealing with a surgery and trust. And everyone in his life is sort of betraying him. The Eye’s about a girl who has a corneal transplant. She gains the ability to see, she takes on psychic abilities of the girl, of the donor, and starts to see death before it happens, and she doesn’t understand. She’s literally seeing for the first time, taking in the world, and also seeing horrible things. So yeah, The Eye’s definitely more scary.”

The actress also revealed about her upcoming comedy film with Mike Myers, “The Love Guru”, which is his first original character since Austin Powers. In the film she played the role of owner of a hockey team.