Cash Warren can thank his wife Jessica Alba for giving him a surprising and emotional birthday. 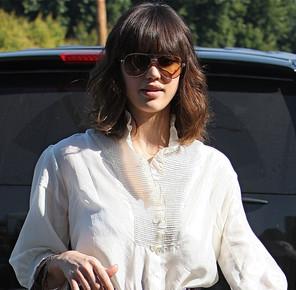 Warren celebrated his 30th with 80 of his family and friends at Tao Las Vegas in a celebration Saturday night put together with secrecy and military precision by Alba.

Telling her husband they were having a quick getaway to Vegas, the couple headed to Sin City on Saturday morning. After they checked into the penthouse at Palazzo Las Vegas, Alba, 27, took Warren to the Canyon Ranch Spa.

A source at the party revealed: “She knew his entire party was checking in so she wanted him to be away from everything so no one would spoil the surprise.”

Following a day at the spa, the couple headed to Tao Las Vegas, where he was surprised when 20 of his closest family and friends awaited his arrival.

Following dinner of sea bass, Kobe beef and sushi, Warren assumed the surprises were over. As he relaxed in a private room, the door to the room opened as 60 more of his friends walked in with a birthday cake shaped in the number 30.

Warren began crying as he smiled at his friends and the cake illuminated by sparklers.

Aside from his friends, Alba also arranged for his favorite band, LA-based Deadly Syndrome, to play as his friends entered. Warren draped his arms around Alba and danced with friends during the 30-minute performance by the band.

Taking the microphone he told Alba: “I don’t know how you pulled this off.” Alba’s reaction: A sly smile and shrug.

The group, which included LA Clipper star Baron Davis, then headed into Tao Las Vegas’ nightclub. Alba, wearing a conservative black dress, reserved the three tables in the VIP area for the group.