Jessica Alba’s has undergone a dramatic makeunder for her new movie role. 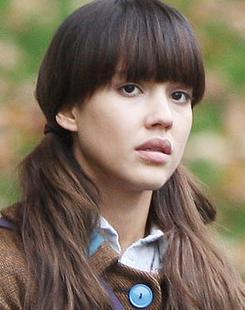 The actress, who is better known for steaming up the big screen in films such as the “Fantastic Four” and “Into The Blue”, was almost unrecognizable as she filmed scenes for “An Invisible Sign of My Own” yesterday.

A bare-faced Jessica looked serious at she strode along purposely wearing a sleeping bag-like puffa coat with her hair in pigtails.

Her Ugly Betty-inspired look is for her role as a mathematical genius who gets a serious illness which causes her to lose the will to live.

But Jessica Alba’s character learns to cope with her circumstances by teaching maths to children.

The actress and Chris Messina seen on set of “An Invisible Sign of my Own” in Tarrytown, NY. When the local school let out, children swarmed around Jessica Alba.

Meanwhile, the actress was recently spotted while attending the “Keep a Child Alive” organization’s 5th annual Black Ball at The Hammerstein Ballroom on November 13, 2008 in New York City.