Jessica Biel may go nude in her new film “Powder Blue.” According to the actress, the only thing stopping her is her fear of getting [email protected] in front of the film crew. 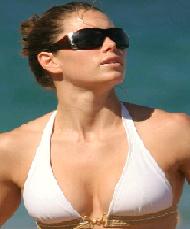 Jessica Biel is dreading posing nude in her new movie “Powder Blue”, because she is terrified of stripping off in front of the film crew.

The actress plays a stripper in the movie alongside Forest Whitaker and Ray Liotta, but is still unsure about baring all.

She revealed, “I haven’t decided exactly about the nudity. It’s a tough one. “I am considering it but it’s a very scary thing to do. It definitely feels vulnerable to be [email protected] in front of anybody let alone a film crew. And it’s scary because of the internet – you don’t know where it’s going to end up. It’s a moment that could be exploited.”