Jessica Simpson may not be engaged to Tony Romo but she is considered a part officially of the Dallas Cowboys family. 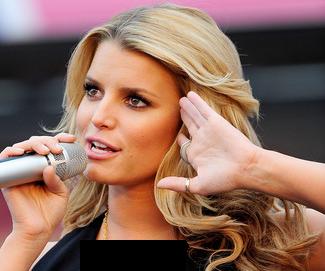 The singer appeared in the 2008 Cowboys Family Cookbook, presented by “the wives of the Dallas Cowboys” ($25).

On page 127, Simpson (who is not photographed) and Romo share their favorite family recipes for a “banana breakfast fruit smoothies” and “no-fat broccoli and cherry tomatoes” (scroll down to read).

The two also show off their funny sides in the book’s biographical section, with Simpson listing her occupation as “hairdresser” and Romo stating that he’s a “fence builder.”

Romo, who lists “U2, Coldplay and AC/DC” as among the artists on his iPod, also revealed that his favorite good is “chicken enchiladas.”

His life philosophy? “Every passing moment is another chance to turn it all around!”

Combine all ingredients in a blender. Blend, until smooth.

Wash broccoli and tomatoes under running water. Cut broccoli into 3/4-inch pieces. Bring broth to a boil, in a 12-inch skillet, over high heat. Add broccoli, salt, and pepper; cook for 2 minutes, stirring occasionally. Push broccoli to edges of skillet, and add tomatoes to center. Cook for 2 minutes, to heat through, shaking pan gently to turn tomatoes. Do not overcook tomatoes, if skin split, tomatoes will be too soft. Season, to taste, and serve.