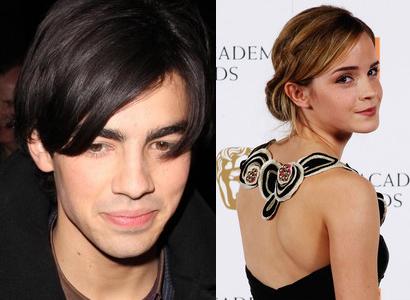 The hunk of the Jonas Brothers, who has vowed to stay a virgin until he’s married, has admitted he fancies the 18-year-old Hogwarts beauty but he’s admiring her from afar.

He grinned: “I haven’t met her, but she’s amazing.”

Joe Jonas admitted he’d like to be like Mick Jagger and dismissed their whiter than white image, saying: “I think everybody wants girl attention. We date and, just like everyone else, we’re looking for love.”

Joe is single after dumping girlfriend Taylor Swift and Nick, who used to date Miley Cyrus, warns any girlfriends have to get past their mum.

He said: “They have to be good to our mother. If they’re not, then it’s pointless. Their heart has also got to be good.”

The brothers also have the eyes of perhaps the most powerful girls in the world trained on them – President Barack Obama’s daughters Malia and Sasha.

Nick said: “We met them in September on the Ellen show, which was a lot of fun. They’re very sweet girls. Then to see them again at the inauguration and be part of that whole experience was really amazing.”

Having visited Scotland twice, the brothers are planning a new world tour and are hoping to return.

But it will be a busy year – they will also start filming the sequel to their Camp Rock film in September. And they will release a 3D movie in May, with the soundtrack out in the UK next Monday.

There are rumours of a huge rivalry between the Jonas Brothers and the cast of High School Musical, but the guys say they are actually on good terms with star Zac Efron.

Joe said: “Zac is a really good friend of ours,” while brother Kevin added: “We sat next to him at the Golden Globes. We had a great time. We love those guys.”