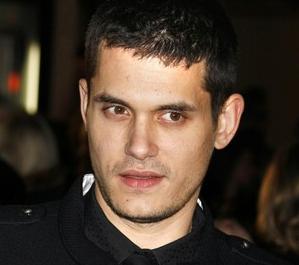 He revealed: “There is no normal thing in the Aniston house. You won’t find a light switch. The light switch is not antiquated.”

He went on: “There is a six-button light panel. It does everything. The top button is on and the button right below that one seems to be an air horn, so in the middle of the night, it [can be] very difficult [to sleep].”

Jennifer Aniston gets confused by her high-tech home, too. John Mayer dished the scoop: “The other day, I’m like, ‘This is the most beautiful kitchen of all time. Where is the trash?'” Aniston, he added, “didn’t know where the trash was.”

DeGeneres then puts Mayer on the hot seat, asking him if he sleeps over. He responded: “Yeah, there are sleepovers, yeah. Yes, yes, there are.”

John Mayer also opens up about that infamous photo of him wearing a Borat-esque, one-piece bathing suit on his cruise.

He added: “It is not photo-shopped,” he says of the photo. “I sort of get drawn into the vortex when I look at it for too long. I have this cruise … and the thing about a cruise is, everybody is supposed to let their hair down a little bit. I let a lot of hair down, but the fact is, that is something you’re supposed to do for your fans. It’s just plain silly.”

Meanwhile, Jennifer Aniston was on the DeGeneres’ show Friday and admitted she isn’t nervous about turning 40 on Feb. 11, saying: “I have to say, really, I feel better than I ever felt in my life. I did have a moment, though, over the weekend… I found a really long gray hair, and it kind of flipped me out.”

“It’s not my first, but it’s the fact that it was so long,” she said. “I was like … ‘How many others are there and what does that mean?’ It actually brought me to tears, slightly.

DeGeneres then asked who will be going to Aniston’s birthday party Saturday. Aniston said definitely her BFF Courteney Cox.

When DeGeneres held up a photo of Mayer (in a one-piece bathing suit), Aniston said, “I got to tell you, honestly, I almost don’t want to touch it.”

DeGeneres then commented on Mayer’s swimsuit, and Aniston said, “The man’s got balls – what can I say?