Jennifer Aniston and John Mayer were together again for the second stop on his summer tour, which hit St. Louis Thursday night. But rather than acknowledge her presence in the crowd, John Mayer teased his audience about interest in his personal life. 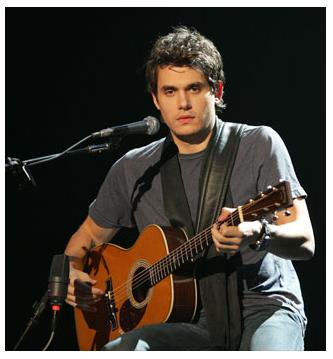 The musician, who was marveling at the coverage of his remarks the previous night, said, “[Fans] send me links from PEOPLE.”

On the Internet rumors, the musician continued, “That just tempts me to say things.” The audience at the Verizon Wireless Amphitheater in the St. Louis suburb of Maryland Heights roared its approval, but Mayer would not divulge any intimate details.

Instead, he playfully peppered his nearly two-hour concert with dubious confessions designed to feed those who were curious about his private life: He fears the color green. He weighed 400 pounds when he was 12. He wrote the lyrics to the Kenny Loggins hit “Danger Zone” – at age 9. And he was “33 percent done” with building a time machine.

He also revealed, “When I was a child I would kill small animals and wear their teeth as necklaces. True. Print that. And I’ve always felt deep down that I was born a woman.”

Jennifer Aniston remained out of sight during the show, but she watched Mayer’s pre-concert soundcheck from the fifth row of the amphitheater, according to radio contest winners who sat a few rows farther back. She wore a slate-colored dress and a cardigan in the damp, late-afternoon air.

A witness, who referred to the “Bubbly” singer who served as Mayer’s opening act, added, “She looked like Colbie Caillet. But it was definitely Jen.”

Other fans clearly had Aniston on the brain. During musical breaks between acts, the twin video screens flanking the stage displayed anonymous notes sent via text message from the crowd. “Team Aniston!” wrote one.

The most brazen of the bunch, preceding John Mayer’s own onstage joking: “John, I’m pregnant. – Jen.”