Jennifer Aniston and John Mayer hit the headlines as they sparked romantic speculations. Will the celebrity couple cope to survive the scrutiny of the cameras? 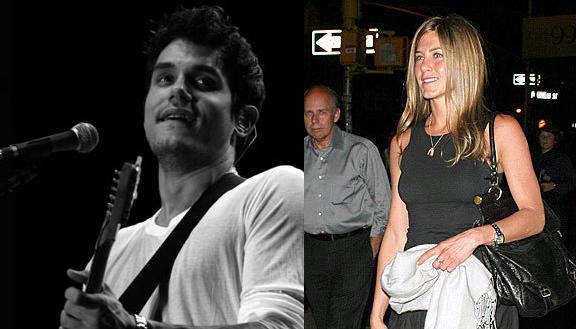 When John Mayer’s tour took him from Michigan to Toronto for a July 7 concert, Jennifer Aniston gave up her plane seat to join him on his tour bus – a seven-hour ride that didn’t get them to their hotel until 5 a.m., according to a report.

Lately, 39-year-old Jen has been working hard to keep up with the nine years younger rock star: in 11 days in July she logged nearly 11,400 miles to seven cities in four countries, the report states.
A friend revealed that the late nights and lack of sleep is taking a toll on her fit, youthful look. The friend revealed: “Jennifer’s lost a few pounds since she started dating John. It’s been exhausting and exhilarating at the same time. They’re always on the go and that’s why she’s losing weight.”

Dr. Richard Fleming, who is the cosmetic surgeon, explained: “Stress, travel and exhaustion can have a dramatic effect on people’s faces even after a few weeks.”

It was reported that Dr. Fleming hasn’t treated the star. According to a source, “She looks exhausted and drawn. It gives her a hungover look, even if she hasn’t been drinking. Unfortunately, it has a greater effect because she’s 39 and not 25.”

This weekend photos of John Mayer surfaced of him in a hot tub with another woman that was not Jennifer Aniston. A website indicated that the gal was identified as ” the wife of a band member.”