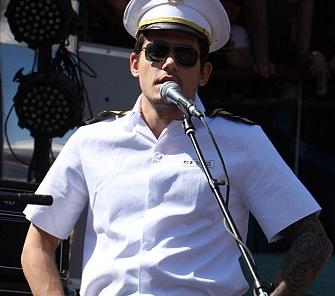 The singer, who has a huge following in the States, adopted a hands-in-pockets stance for the performance.

His outfit was inspired by Captain Stubing from the 70s U.S. TV series The Love Boat.

Mayer was performing onboard the Carnival Splendor cruise ship as part of Mayercraft Carrier 2.

The ship is touring between Los Angeles and Mexico, with Mayer onboard.

The musician derided fans of the blogging site, despite being a regular user himself.

“If you really think that Twitter is the pathway to spiritual enlightenment, well… It’s one step away from sending pictures of your poop,” he told E!.

Explaining his presence on Twitter, the 31-year-old said: “I’ve always communicated at a high level as best I can whether it’s Twitter, Napster or message boards or wherever.