Looking sharp in a pinstriped Ralph Lauren suit, Johnny Depp works the crowd at the Chicago premiere of Public Enemies on Thursday. 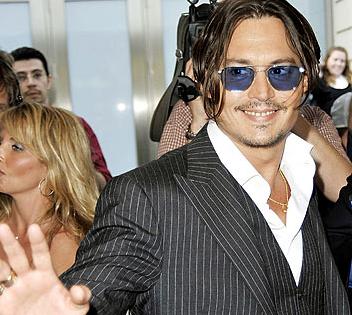 Meanwhile, Johnny Depp has named a beach after Heath Ledger.

The actor owns a private island – called View the profile for Johnny DeppLittle Hall’s Pond Cay – in the Bahamas and has paid tribute to the late Hollywood star by naming a stretch of sand Heath’s Place. The “Dark Knight” actor died aged just 28 of an accidental prescription drugs overdose in January 2008.

Depp was a close friend of Ledger’s and stepped in to help finish his final movie ‘The Imaginarium of Doctor Parnassus’, after Ledger died part-way through filming.

Depp has also named a beach on the 45-acre idyllic island after his partner Vanessa Paradis and their two children – 10-year-old daughter Lily-Rose and son Jack, seven.

The 46-year-old star recently revealed he escapes to the Bahamas to feed sharks when the pressures of fame are getting too much.

Depp said: “Whenever I was getting frustrated about being ‘novelty boy’ and making movies, I told myself, ‘Calm down.’ I can come down here and disappear. I spent the Christmas season here with Vanessa and the kids. You can feed hot dogs to the nurse sharks in the Exumas (the Bahamas Out Islands) – but it’s best to not swim when doing it!”