Miley Cyrus hosted the Teen Choice Awards in 2008, but this year, it’ll be her ex, Nick Jonas , and his famous brothers running the show. 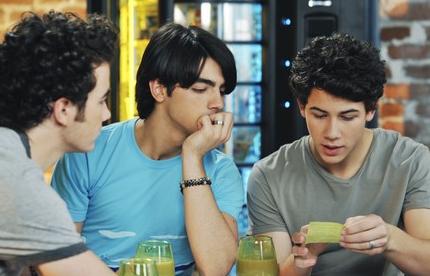 Nick, Kevin and Joe, known collectively as the Jonas Brothers, will host and perform on the 11th annual Teen Choice Awards, which is set to air Monday, August 10 at 8 PM on FOX.

The show will come during the middle of the Jonas Brothers’ 2009 world tour, which kicks off in Dallas, Texas on June 20, five days after the release of their latest album, “Lines, Vines and Trying Times” [pictured].

And the band of brothers’ busy schedule continues on May 2, when their Disney comedy show, “JONAS,” debuts.

Meanwhile, Joe Jonas holds up a look-a-like potato chip in this new still from JONAS.

In the upcoming episode “Band’s Best Friend,” Kevin, Joe and Nick’s childhood best friend, Carl (guest star Nate Hartley), tries to use their fame to his advantage. Meanwhile, Stella (Chelsea Staub) is upset with Macy (Nicole Anderson) for using the money she loaned her to buy a collectors’ potato chip that looks like Joe.