Jonas Brothers, who previously denied that the group is breaking up, answered 17 juicy questions. 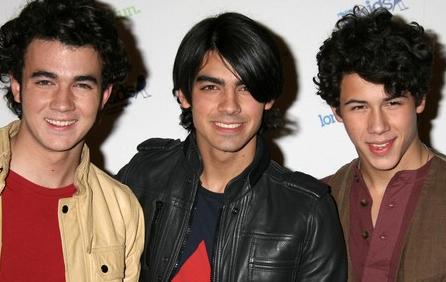 Here are the highlights of their interview with Seventeen magazine:

What’s a girl fashion trend that confuses you?
Collectively: The “I don’t care look” when a girl is wearing sweats.

What’s the girly movie you secretly love?
Collectively: How to Lose a Guy in 10 Days

Who would play you in the movie version of your life?
Joe: Corbin Bleu
Nick: Mark Wahlberg
Kevin: Christian Bale

If you could trade places with anyone in the world for one day, who would it be?
Collectively: Prince William

Who in your family are you closest to?
Our uncle Josh, who travels on the road with us.

What’s your favorite Website?
Our MySpace page, but we do use Google a lot and we like perezhilton site.

What’s the fast food you can’t live without?
In-N-Out Burger

What’s your worst habit?
Kevin: My bag explodes with clothes all over my hotel room floor every day.

What’s the last song you listened to on your iPod?
Kevin: “Desperado” by the Eagles
Nick: “Let It Be” by the Beatles
Joe: Barney sing-along songs

What’s the last thing you bought?
Collectively: A full cowboy outfit at a truck stop in the middle of the Texas desert at 2 a.m. last night!

What did you dream about last night?
Collectively: Flying.

How much money is in your wallet right now?
Kevin: I carry cards because I don’t like cash.
Joe: 42 cents
Nick: $750

Fill in the blank: When I was 17, I was ____________.
Kevin: I was a total nerd and had like two friends, and then I left my school and got signed to a record deal. Also, I got my license — it was awesome.
Joe: I released my first record and had my first year of awesome touring.
Nick: I’m not 17 and never have been. But I hope to have gone multi-platinum and to travel the world.