Justin Bieber enjoyed a day off while hanging out with his friends and family in Los Angeles on September 22. 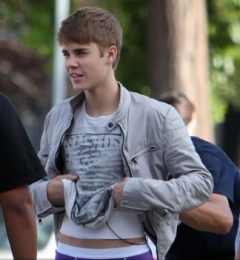 The “Baby” singer first went through the just-opened Chick-fil-A drive thru before taking off to do a video skit of him fighting with a group of bullies. And he was flaunting his purple boxer briefs for everyone to see. He is set to resume My World tour’s Latin America leg in Monterrey, Mexico on September 30th. Meanwhile, Justin made a cameo in released music video for the second season of “How To Make It In America”.