Justin Bieber was finally allowed by Liverpool police to on his balcony and wave at fans surrounding his hotel in England. 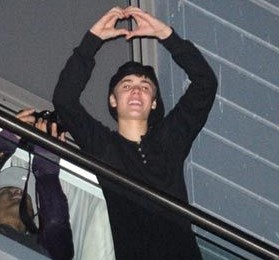 Police thought that they could finally manage the crazy situation at the hotel so they encourage the “Baby” singer to wave to his fans in the hopes that the fans will finally go home.

But the crowd remains. Justin was previously threatened to be arrested if he went on his balcony, because this could incite a riot.