Justin Timberlake and Jessica Biel, who previously buzzed with vintage ring report, made a rare appearance together Saturday at a Las Vegas rally for Barack Obama. 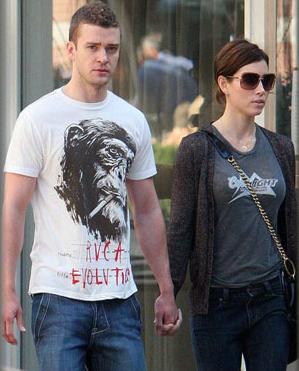 Justin Timberlake gave an off-the-cuff riff performance. The “SexyBack” singer sang “Vote in a Box,” a spoof of his infamous raunchy Saturday Night Live sketch, according to a campaign source.

The 27-year-old singer revealed at the Clark County Government Center amphitheater: “Me and Jess, we’re here as Americans. We’re here as humans because this is something we had to do. We’ve never publicly endorsed before. But we’ve never been so inspired by one person.”

Jessica Biel, who appeared to consider the fact that the next president’s Supreme Court appointments could determine the future of legal abortions, declared: “Nobody should be able to say what you can do with your body.”

Justin Timberlake joked: “I give Jess the right to choose where we go to eat all the time. The funny thing is, what the woman chooses is usually right.”

Jessica replied: “Brownie points for you.” And Justin teased her, saying: “I know where my bread is buttered.”

Felice Garcia, a 21-year-old college student who attended the rally, revealed that she was impressed Timberlake took time out to attend the rally. She added: “I really respect him for that. He obviously cares about this.”