Justin Timberlake struggled to keep his eyes off pop superstar Madonna when they collaborated for her upcoming album. 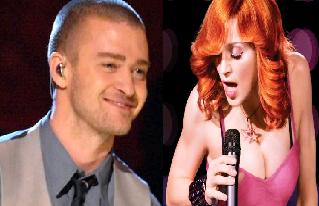 The pair recorded a top-secret duet, which has yet to be released, in London earlier this year. Justin Timberlake admits he was unnerved around the music legend.

The “SexyBack” singer revealed, “It was amazing. I was just constantly staring at her. I became like the weird stalker in the corner.”