Kate Bosworth hit the front cover of US Vogue magazine for its February issue. 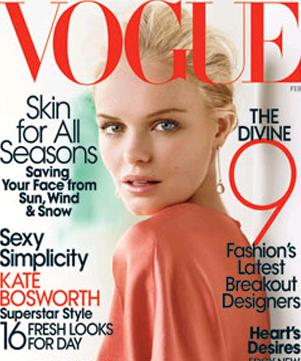 The “Superman” actress posed for a sexy snap for the magazine, which you could see here. In the magazine she opens up about her relationship with Orlando Bloom, why she shed so much weight, and her new love.

On her famous relationship with former boyfriend Orlando Bloom, she revealed, “Orlando and I met when we were kids. Blue Crush hadn’t come out. Lord of the Rings hadn’t come out. … He was the first big heartbreak. … First love: You feel like it’s the be-all and end-all. … To put as little pressure on the relationship you’re in is very important. I regret that it was too intense for both of us.”

On the fact that they are still friends, she replied, “The fact that I’m very close with my past relationships is something I pride myself on. My mom is still close to her first husband. It’s nice to be able to enjoy someone in a different form.”

On losing 12 pounds from stress, she explained, “Whenever anything happens that’s very painful or stressful, we all lose weight — my mother, my aunt, my grandmother. … I honestly thought something was wrong with me. … I was concerned for my health and my fans, the public. I would have said, don’t look at this as the standard of some kind of beauty and health. [It was] a very dark time in my life.”

On meeting current boyfriend James Rousseau at the Marc Jacobs after-party, she added, “I looked like a mess. I always ask him why he didn’t turn and walk away. He had no idea who I was. He said, ‘You’re and actress? You’re not Kate Hudson, are you?’ For a little while there he called me ‘Miss Hudson’ as a joke. [Afterward] we left and sang Dylan songs at Maggie’s Pub. Sitting on a bar stool, having a beer. He saw the potential. He wanted to fix me in a little way. And to be quite honest, he did. He was such a ray of light in my life.”