Kate Middleton has sparked a lot of speculation after she arrived to curate a photo exhibition sporting a massive diamond ring on her left hand. 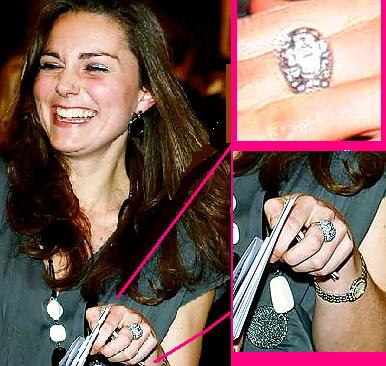 The girlfriend of Prince William, who wears a demure gray gown Prince William’s girlfriend, ran the event in high spirits with her sister Pippa at The Shop at Bluebird in Chelsea.

The brunette beauty wears a diamond ring on her middle finger, but that didn’t stop speculation over who bought the dazzling jewel for her.

Prince William turned up late and he is sporting a striking stripy shirt and black blazer. But he made up for his tardy arrival by having dinner with Kate, Kate’s sister and mother and nightclub promoter Guy Pelly.

While the 25-year-old prince slid out a side door with his protection officer, his girlfriend opted for a black cab to take her home.

The exhibition showcased limited edition photographs of celebrities by Alistair Morrison taken to raise funds for UNICEF. The photographer tipped the Prince’s girlfriend as a future star in the art world.

Mr. Morrison revealed, “She takes beautiful detailed photographs. She has a huge talent and a great year. I’m sure she will go far.”

He has known Miss Middleton since she was a history of art student in St Andrews.

The exhibition runs at The Shop at Bluebird until Christmas. Miss Middleton is planning the event to be the first in a series at The Shop.