Kate Middleton steps out of a taxi for an evening at one of her favourite club, Boujis, in South Kensington with her younger sister Pippa. 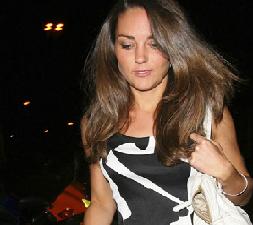 After her recent disappointment of being forced to pull out of her Channel boat race, the 25-year-old brunette was back to doing what she does best – enjoying a night out clubbing.

At least she doesn’t have to worry about anymore 7am starts rowing on the Thames with the Sisterhood. It is because she abruptly dropped out earlier this week over ‘security fears’ that her high-profile presence might jeopardize the safety of the other rowers.

However sources say Kate Middleton was ordered to drop out by royal aides who feared her continued role was in danger of becoming a major media event.

Clarence House had watched on with growing unease as the Sisterhood’s practice sessions on the Thames near Chiswick and Putney had become a magnet for the paparazzi.

Courtiers feared she was fast becoming a “media distraction”.