Kate Moss and Lily Allen had to be separated after a dramatic row over Courtney Love on October 2. 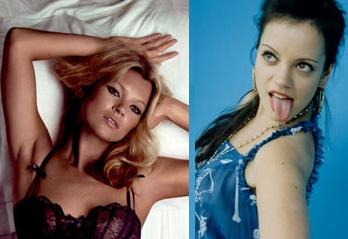 The pair got into a heated debate at London’s The Groucho Club when Lily Allen attacked Courtney Love for her feud with Kelly Osbourne. Kate Moss angrily defended her friend when she said she was a “great woman.”

A source revealed, “The trouble started when the pair met at the Groucho. Lily ran up to Kate, but after chatting amiably for a while she brought up the subject of Courtney and a row that had blown up between her and Kelly Osbourne.”

A source continued, “She was ticking Courtney off in a light-hearted manner, but you could tell Lily meant it. Kate certainly got that impression because she leapt to Courtney’s defense.”

A source added, “Kate’s intensely loyal and told Lily that Courtney was a great woman. Lily begged to differ, but luckily at that point staff noticed tempers were flaring and directed Lily and her friends to a separate lounge on a different floor.”