Hollywood actress Katie Holmes has spent £10million since moving to New York six months ago, it was claimed last night. 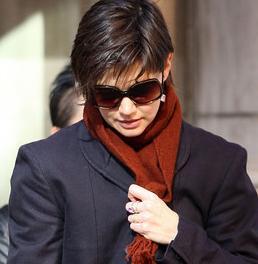 Tom Cruise’s wife moved to the Big Apple last July to appear in Broadway play “All My Sons”.

Most of the £10million is believed to have gone on buying three apartments in the block where she is staying.

Katie Holmes, 30, has been living in a flat owned by Tom, 46, and has also splashed out on gym gear for daughter Suri, 2, along with childcare, clothes and socializing.

The New York Post has dubbed her “Manhattan’s Most Valued Shopper” during the credit crunch.

It said: “She has been valiantly doing her bit to boost our economy.”

Katie Holmes is expected to move back to the family’s Los Angeles home after the play finishes next week.