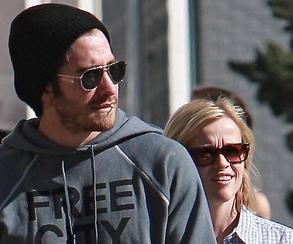 The “Legally Blonde” actress wore a grey cardigan over a black top and skinny jeans paired with brown distressed leather high boots with folded cuffs. Her makeup was light and her gold hoop earrings peeped through her casually styled shoulder length blond hair.

Reese Witherspoon’s most recent film, Four Christmases, which hit theaters on November 26, has grossed an impressive $143 million worldwide. The comedy directed by Setch Gordan additionally headlines Vince Vaughn and dwells on a couple’s struggle to visit all four of their divorced parents on Christmas Day.

Reese Witherspoon, 32, who has been dating Jake Gyllenhaal, 28, since her divorce from Ryan Phillippe was finalized in October 2007, says she hasn’t reconciled with her divorce and doesn’t know if she will marry again.