Katie Holmes is so dedicated to “All My Sons” on Broadway that she spent the night of her 30th birthday Thursday without husband Tom Cruise. 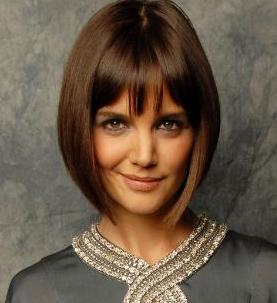 The actress is skipping January’s Golden Globes, at which Tom is nominated for Best Supporting Actor.

While her husband was at the Los Angeles premiere of “Valkyrie,” Katie and Suri were serenaded by her fellow cast and the audience with “Happy Birthday” and given a huge cake – from Tom – at Thursday’s curtain call.

Addressing the audience, Holmes’s costar John Lithgow announced, “Tom Cruise, our good friend, devoted fan to the show, doting husband of Katie, could not be here tonight. He’s heartsick that he couldn’t be here … but he wanted to make his presence felt. So, he’s joining us, inviting all of you, to celebrate Katie’s birthday.”

And with that, crewmembers wheeled out a five-tiered, white-frosted, circular birthday cake as the crowd cheered and applauded…

A genuinely surprised Holmes, who had been celebrating her birthday all week long, brought her 2-year-old daughter Suri on to the stage as the cast – including Dianne Wiest and Patrick Wilson – encouraged the entire audience to sing “Happy Birthday.” Together, the mother-daughter duo blew out the candles.

Meanwhile, the final performance of “All My Sons” is scheduled for the same night as the Golden Globes, that of January 11th.

What would be her choice: Broadway or her husband’s awards show? Ina Treciokas, Katie’s press representative, answers the question definitively, saying: “Katie’s decided to stay and her do last show. She won’t be going with Tom to the Globes. The cast of ‘All My Sons’ has been like a family and they want to end it together. Katie Holmes has been a stalwart. She hasn’t missed a performance, as far as I know. She’s remained devoted to the play even though she’s got the smallest of the four leads.”