Katie Holmes, who previously spotted having a pizza day out with Suri, is set to star in Miu Miu’s new advertising campaign. 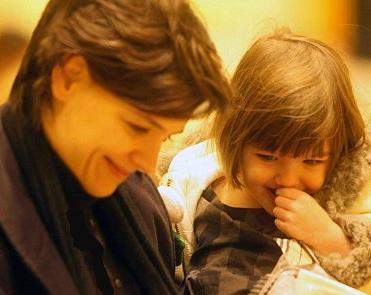 The 29-year-old actress will follow in the footsteps of Drew Barrymore, Kirsten Dunst and Lindsay Lohan by appearing in the adverts.

An insider revealed: “Katie is soon going to start shooting the photographs for the spring 2009 campaign. She will be posing alongside real models, who will be positioned as ‘accessories’ in the campaign. It’s quite edgy and very different for Katie.”

The “Batman Begins” star will be replacing Johnny Depp’s partner Vanessa Paradis who is the current face of the fashion company.

Katie Holmes is no stranger to the fashion industry, and has worn a series of outfits she has designed herself to recent events.

Following Katie’s appearance at the “Tropic Thunder” premiere earlier this year, where she wore a glamorous midnight blue dress complete with leather pleated bodice which she designed herself, reports emerged that she was planning to launch her own clothing line.

Meanwhile, Katie Holmes set out for a spot of retail therapy in New York yesterday accompanied by her favorite shopping companion, little Suri.

The mother-daughter duo also made time to stop in at the Rockefeller center to see the Christmas lights, where they browsed through trinkets at a souvenir store.

The two-year-old, ever the mini-fashionista, rugged up in a Burberry coat while Katie kept it casual in denim shorts, tights and black jacket.

The pair are enjoying some bonding time while Tom Cruise is busy working in Los Angeles.