Keeley Hazell, the UK glamor model, has posed for the steamy shots of her 2008 official calendar. 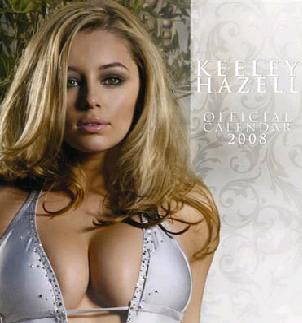 The Page 3 girl has released her two kinds of her official calendar: one kind is a steamy bathing suit and the other one is the topless version. You could see Keeley Hazell calendar shots here.

Keeley Hazell, known for her 32E bra size to UK tabloid newspaper readers, recently launches ‘Simpsons’ game. She unveiled the game to crowds in London’s Trafalgar Square as she pressed the right button to drop a curtain behind which were details of the firm’s cartoon spin-off.