Kelly Brook was seen topping up her tan on a Carribean beach and was snapped taking a topless sunbath. 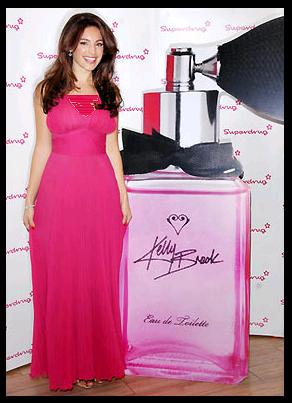 The 28-year-old star, who caused waves of panic among fans in 2005 when she vowed never to strip again for sizzling photoshoots, was spotted maintaining her good tan as she took a sunbath here. She was also seen wearing another bikini here.

The “Strictly Come Dancing” also wore a blue and white striped 50s style bikini and retro sunglasses as she relaxed in the Caribbean heat with fiancé Billy Zane as she playfully stuffing sand down his shorts by the sea at Columbier.

Until now, she has kept her desert island discs firmly away from cameras on holiday on the isle of St Barts.

But finally she did castaway her bikini top, to lay sunny side up on a striped towel – and looked as swell as ever.

Speaking about her fiancé recently, Kelly Brook revealed how lucky she feels to have her supportive fiancé Billy by her side, saying, “Billy is an amazing guy. He’s charming and sexy. He can make me laugh and is really romantic.”

The pair have been engaged since 2006 but are yet to set a date for the wedding.