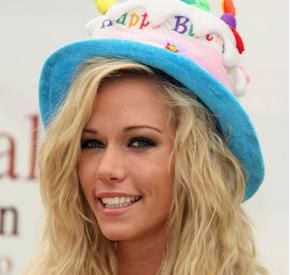 The “Girl Next Door” star, 23, is waiting for Baskett’s season to be over so he can help with wedding details. The 26-year-old wide receiver’s team, the Philadelphia Eagles, is contending for a playoff spot.

In a Las Vegas blog, she said: “I’m waiting for him to come out here and help me plan. I’m ready to just get married.”

Recently fully moved out of the Mansion, Wilkinson is “retiring from the whole nudity thing” and now focusing on being an athlete’s wife.

She continued: “I love football, but I never thought I would marry a football player. We all have our perfect match, I have.”

Although initial plans called for her former beau Hugh Hefner to walk her down the aisle, she says she’s now having second thoughts about that.