It seems Kim Kardashian is ready for a romantic weekend with her beau Reggie Bush. The “Keeping Up with the Kardashians” starlet and her boyfriend were spotted at LAX Airport on Friday, February 13. 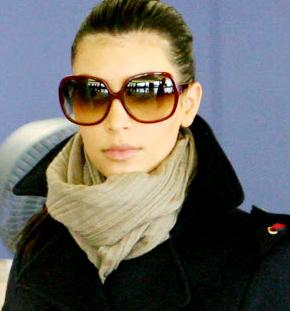 The lovebirds dragged their luggage to the Delta ticket counter where they checked-in for their departing flight. Kim and Reggie were seen walking side-by-side while making their way at the airport one day before Valentine’s Day.

In previous news, Kim Kardashian revealed she wants to give up fur to save her romance with Reggie Bush and her friendship with sister Khloe Kardashian.

“I haven’t bought anything new since Khloe did the ad,” she said. The socialite also recalled her experience when she and Reggie drove past an anti-fur rally at the 2008 Sundance Film Festival, telling E! Online, “I was wearing a fur vest, and he was like, ‘This is humiliating. I can’t go out with you.’ We were driving past the protest and he was rolling down the window and screaming, ‘She’s in here. She’s in here.'”