Kim Kardashian, who has been dating Reggie Bush since April 2007, insisted that her beau was “really serious” and “the best.” 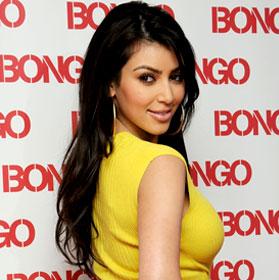 The celebrity couple has talked about their relationship. Kim Kardashian has been dating NFL player Reggie Bush since April 2007. The socialite, who was wearing a red and leopard print bikini, was also spotted with her sister in the pool here.

She revealed over the weekend when asked about marriage, “That’s definitely where we are heading. That’s something that we do talk about. I think that when you spend so much time with someone who is such a big part of your life, that’s definitely the future.”

Kim, Khloe and Kourtney Kardashian recently put a lunch date and shopping outing (at their DASH store, naturally) on eBay to raise money for the Dream Foundation.

Strangely enough they were able to raise $8,800 for charity. Surprising that anyone would pay money to hang out with the Kardashian girls, but it is for charity…

Here is Kim Kardashian along with her mother Kris Kardashian and older sister Kourtney Kardashian arriving at the Golden Nympyh Awards Ceremony during the 2008 Monte Carlo Television Festival on Monaco.