Kim Kardashian, who recently revealed that her butt is real, was spotted wearing a tight black Capri sweats on August 16. 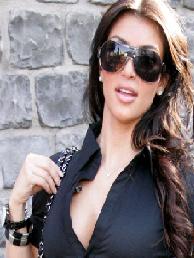 The socialite, who recently has a reality television show, even blew kisses to the photographers when they took pictures of her.

As for her upcoming reality show, the socialite laughed off reports that her show is the reason why “The Simple Life” was ended. She revealed that she’s sure that Paris Hilton and Nicole Richie had their time with the show and that they’re ready to move on to other projects.