Kim Kardashian, who is famous for her sizzling video tape, has posed for Zoo Magazine Australia. 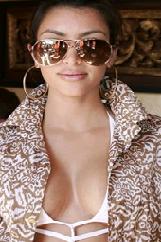 The socialite, who also strip for Playboy, did some topless photo shoots and photos wearing a black bikini for Zoo Magazine.

Kim Kardashian, who is also a friend of Paris Hilton, is slated to do a reality television show show for an unnamed network. Speaking of the show, she revealed, “We’re all so different. Khloe’s, like, hysterical and says these ridiculous things. Kourtney is such a b*tch. I’m in between. Brody’s so wild. The two little ones are adorable…It’s just such a good mix.”