The first post-“American Idol” albums from three recent contestants on the hit show are expected this fall, in time for the holiday season. Release dates are still to be announced. 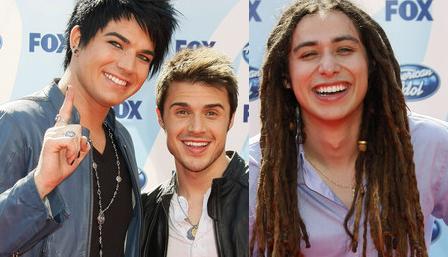 Kris Allen
As the most recent winner of “American Idol,” Kris Allen isn’t just expected to record a debut album — he’s supposed to make chart-topping hits and live up to the sales of Kelly Clarkson, Carrie Underwood and David Cook before him.

For his fall debut on 19/Jive, the 23-year-old has a wealth of songwriters and producers to choose from: David Hodges (Clarkson, Daughtry), Salaam Remi (Nas, Amy Winehouse) and Claude Kelly (Akon, Leona Lewis) have all submitted material for the record. Allen also collaborated with Joe King of the Fray in June at Timbaland’s Virginia Beach, Virginia, recording studio.

“Each writing session has been a learning experience,” says Allen, who adds that his record will sound similar to John Mayer and Jason Mraz, with possible traces of the urban sound that he’s been exploring with some collaborators. “I think that we are trying to figure it out and that it’s going the right way, and I’m really excited about it. I can’t wait.”

Adam Lambert
Adam Lambert is unlike any “American Idol” contestant before him, and not just because of his Goth-glam fashion or seemingly infinite vocal range. The eighth-season runner-up is recording an album for 19/RCA Records just as another set bearing his name is headed to stores.

Due this summer, “On With the Show” (Hi Fi Recordings/Wilshire Records) will feature material Lambert recorded pre-“Idol.” Naturally, he wants fans to wait for his proper fall debut, saying, “The work I did back then in no way reflects the music I am currently in the studio working on.”

The singer has so far teamed with producers RedOne (Lady GaGa) and Ryan Tedder of OneRepublic (Beyonce, Jordin Sparks), while Sam Sparro and Jim Jonsin have contributed as well.

Tedder says his songs with Lambert have a New Wave, Tears for Fears vibe, but that choosing a musical direction for Lambert results in an embarrassment of riches. “He can sing so many different styles of music,” Tedder says. “I think he can be a global superstar; there’s not a doubt in my mind.”

Jason Castro
The original dark horse contestant on “American Idol,” Jason Castro finished in fourth place in season seven and in April signed with Atlantic Records, marking the first time the label will work with an “Idol” alumnus.

“If you fell in love with Jason on the show, this is exactly the record you’d want him to make,” says Pete Ganberg, Atlantic executive vice president/head of A&R. “It’s introspective, playful and very much a combination of his influences, which range from Jeff Buckley to Jack Johnson.”

The dreadlocked singer co-wrote 11 songs on the 14-track set, which features production and additional songwriting by Evan Rosse, John Fields and Kara DioGuardi.

“I’m really excited about the music we’ve written,” says Castro, who also signed a deal with Universal Music Publishing Group in June. “I’m ready to get out there and show it to the world.”

A debut single is expected to hit radio in August.