Kris Allen picked up the “American Idol” title on Wednesday night, and while it may have shocked some media pundits who were expecting an Adam Lambert victory, a source close to the show revealed the final vote was not even close. 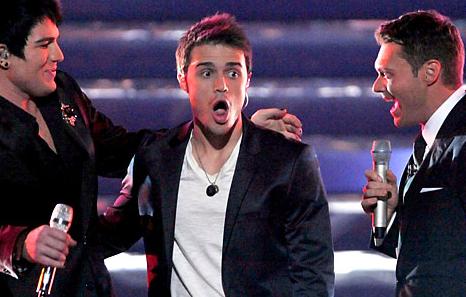 A top FOX source said that the vote left Kris as the clear winner by a large margin.

And upon learning the news during his visit to Access Hollywood and “The Billy Bush” show on Wednesday morning, Kris wasn’t sure how to take the information.

“Really?” Kris said. “America’s gonna vote whichever way they want to… I don’t know. Whatever happened last night, was just a — it’s a total surprise for me so I don’t even know how to feel about that.”

When asked why he thought he prevailed over Adam, the 23-year-old Conway, Ark., singer suggested it may have been because he is “just a regular guy.”

“There’s not a whole lot of people that approve of the whole guy-liner thing and the nail polish and all that,” Kris said. “But for me, I love Adam and I think he’s one of the greatest people that I’ve met so far. For me, I’m just a regular guy and I think a lot of people just related to me.”

And Adam had Kris’ back – including just moments after the young man won the title, reminding him he had to sing “No Boundaries,” a song co-penned by “Idol” judge, Kara DioGuardi.

“Seriously, Adam hugged me and goes: ‘You have to sing that song now.’ I was like ‘Ohhhh gosh!'” Kris said of the moment. “I was like ‘OK, just sing it!’ I thought it went OK.”

As for the song, which Randy Jackson and Kara both decided might be too high for Kris during Tuesday’s competition, Kris admitted it is a tough tune to belt out.

“I like the song. It’s tough to sing, I’m not gonna lie. It’s a rough song, but Kara’s a great writer,” Kris said. “It was so much fun working with her in the studio. She’s a lot of fun to work with.”

Slightly easier was performing with superstars Keith Urban and Queen on the show’s season finale.

“Playing with Keith Urban, it was really great,” Kris said. “Getting to meet him — he’s just a laid back guy, just a cool guy, laid back just like I am and he was like, ‘Lets go out there,’ and that’s what we did. And had a great time and getting to play with Brian May and sing with him and sing with Queen? Wow! That was priceless.”

Another priceless moment came for Kris at the end of the show, when his wife of seven months, Katy, came on stage for a celebratory embrace.

“She’s been my biggest supporter and since we got together seven years ago, she’s always tried to make me work harder at music,” Kris said of his lady love. “She believed in me a lot because there were times when I wanted to give up and she was like, ‘No, don’t stop, you’re really great and you need to keep doing this and you’re not gonna be happy unless you keep doing this,’ and I think she’s happy that my dream has come true.”

On getting the Ford Fusion for winning the singing competition, Kris jokingly said: “I think my wife is more excited about it than I am.” He then quickly added: “[But] I try to be very eco-friendly.” In addition to the new ride, Kris will also sign a recording contract to release an album.

Asked about his speech on-stage upon winning the “American Idol” title, during when he said fellow contestant Adam Lambert deserved to win, Kris explained: “I actually feel that. He deserves this just as much as I do. He’s an amazing performer and a gifted guy. And a really amazing guy. It was fun doing this with him. Adam does his thing and I’m going to do mine. That’s what I did throughout this whole competition and I think it worked. Obviously, it worked.”