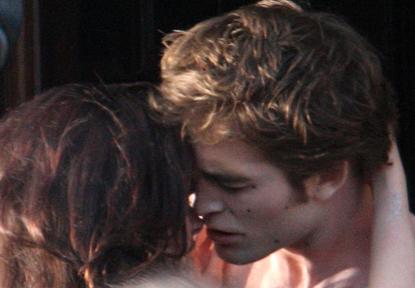 A shirtless Pattinson shows off his bod while leaning into Stewart for the smooch, filmed in Montepulciano, Italy, today.

Sure to make all of the “Twilight” fans’ day a little brighter, Kristen Stewart and Robert Pattinson shared a passionate kiss while filming a scene for “New Moon” in Montepulciano, Italy on Wednesday (May 27).

The co-star pals got hot and heavy, with Robert walking out shirtless before planting a big kiss on Miss Stewart.

The smooch scene comes as Mr Pattinson’s recent hookup in Cannes, Erika Dutra, has been chatting with the tabloids about the pair’s rendezvous.

(While Stewart gets paid to make out with her sexy costar, bidders recently ponied up big bucks to peck Pattinson. At an amFAR charity event in Cannes last week, two smooches from the star went for $28,000 each.)

Pattinson also showed off his ripped six-pack on the flick’s Italian set.

For Twilight, the British actor says he dropped 30 pounds before stripping down.

“I was just trying to lose like every ounce of body fat so when I took off my shirt, I would look like an alien,” he says. “I thought that kind of worked for the story.

“I was so much more muscular than I had ever been in my life, but I looked weird,” he admits.