One week after Los Angeles police confirmed that investigators had not ruled out homicide in the death of Michael Jackson, the late singer’s older sister, La Toya Jackson, reveals that she suspects he was murdered, according to a report. 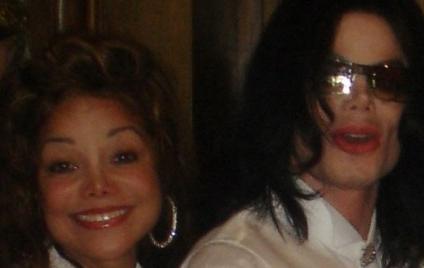 “I believe Michael was murdered,” she said. “I felt that from the start. Not just one person was involved, rather it was a conspiracy of people. He was surrounded by a bad circle. Michael was a very meek, quiet, loving person. People took advantage of that. People fought to be close to him, people who weren’t always on his side.”

She blamed this “shadowy entourage” for supplying him with prescription drugs.

“They got him hooked on drugs,” she said. “He was pure and clean and then drugs came back into his system. I think it shocked his system so much it killed him.”

Although results from toxicology tests will take a few more weeks to reveal a definitive cause of death, La Toya — who signed Michael’s death certificate on June 25 after he suffered a cardiac arrest at the age of 50 — is certain the investigation will reveal her worst fears.

“He had needle marks on his neck and on his arms and more about those will emerge in the next few weeks,” she said. ” I cannot discuss that any further as I may jeopardize the investigation. I can, however, say that I have not changed my mind about my feeling that Michael was murdered.”

She added: “It will all come out. You will be shocked.”

La Toya, 53, also asserts that Michael — whom she said “was the loneliest man in the world” — was forced into doing 50 concerts in London and was kept away from his family as he went to rehearsals, costume fittings and vocal lessons at all hours.

She said that throughout her and her family’s mourning, they plan to file a civil lawsuit against anyone — which could potentially include Michael’s personal doctor, Conrad Murray, whom La Toya said “disappeared” after she sought answers from him — they believe responsible, as well as pushing for police to serve criminal charges.

“I am going to get down to the bottom of this,” she said. “I am not going to stop until I find out who is responsible. Why did they keep the family away? It’s not about money. I want justice for Michael. I won’t rest until I find out what — and who — killed my brother.”

La Toya is equally determined to resolve the custody battle between Katherine Jackson and Debbie Rowe over Michael’s two eldest children, Prince, 12, and Paris, 11 (La Toya confirms that Blanket, 7, was conceived with a donor egg and donated sperm and that his biological parents are unknown).

“These are not Debbie’s kids,” she said. “They don’t even know she’s their mother. Like everyone else in his life, she was motivated by money. She has always said she’s not their mother. My understanding is that she will now go after the kids. I know a few things about Debbie, and I will prevent that from happening.”

In the end, La Toya — the sibling her family said had “a special bond” with the star — said she won’t rest until she finds out the truth about the King of Pop’s death.

“I’m doing what I can to find out how he died. If he died of a drug overdose, then I want to find who supplied him the drugs and who first introduced him to them,” she said. “We’ve still not had a chance to speak to Dr. Murray about Michael’s final days. I need to know what he may have seen or heard.”

She added: “Michael didn’t have to die. We are all mourning his loss, more than anyone can ever know. But we are also determined to get to the bottom of what happened to him.”