Jenny Shimizu, who was a former lesbian lover, is striking back at Angelina Jolie’s statement that she gave up lesbian and kinky sex when she met Brad Pitt, saying, “She loves danger and dabbling in the dark side. Angelina is an unbelievable lesbian lover. That’s where she gets her kicks — not playing happy family with one man.” 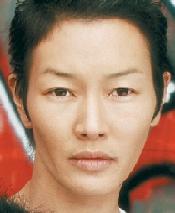 About Angelina Jolie’s relationship with Brad Pitt, Jenny Shimizu revealed, “It seems like he comes from a different place. He wants to have kids and he wants to have a perfect marriage. She’s a tough woman who will do everything she wants to. I don’t think there is any way of controlling Angelina. She’s not going to be a housewife. Maybe she would settle down and be with one person but I think she goes looking for excitement all the time. Her passion is people and it’s hard to just settle down with one person when you have a whole world in front of you. I’m not saying she sleeps with a lot of people. But I can’t imagine her just being married and being happy.”

Jenny Shimizu did not believe the actress’ claim of monogamous heterosexual relationship. She added, “She loves women too much. It’s like a drug and she was hooked.”