Lily Allen has been signed up as the new face and body of Agent Provocateur lingerie. 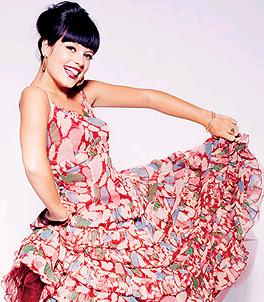 The “Smile” singer, who recently slimmed down from a UK dress size 12 to a size 8, will follow in the footsteps of Kate Moss, Maggie Gyllenhaal and Dita Von Teese when her campaign shot for the company on November 5, is released next spring.

An insider revealed, “The owners of Agent Provocateur, Joe Corre and Serena Rees, are delighted. They feel her natural look will appeal to a lot of women. She’s in amazing shape since she lost the weight, and the pictures of her are absolutely incredible.”

Lily Allen, who reportedly received a whopping six-figure sum for the deal, has put her weight loss down to hypnosis, saying, “After the hypnotism I want to go to the gym every day otherwise I feel really bad. I just want to get more toned and healthy. I’m really good at the moment – I’ve never been happier.”