Lindsay Lohan, who went to rehab again, has been dubbed “a model patient” by sources at the Utah rehab clinic she checked into earlier last month, despite claims to the contrary. 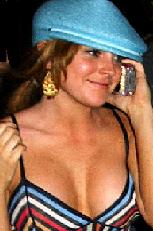 In a U.S. TV exclusive, a silhouetted former Cirque Lodge patient suggested the actress is getting celebrity treatment and is difficult with staff.

But according to a website’s report, it claims the opposite is true, according to their sources. Insiders at the Oren, Utah clinic claim the “Freaky Friday” star is taking her third counseling camp stint of 2007 very seriously, attending every meeting, working with psychologists and even agreeing to take on menial tasks she’s handed. These include washing dishes and cleaning toilets.

Sources added that the woman who took her claims against the actress to the media dropped out of a sister clinic “against medical advice” days after the actress checked herself in.