Lindsay Lohan and Samantha Ronson are paying tribute to those who perished in the 9/11 NYC attacks seven years ago today. 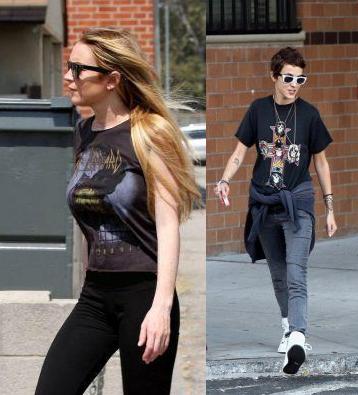 The “Freaky Friday” actress wrote on her MySpace blog: “I am in New York and I would like to remind everybody to take a moment today for those lost in tragedy that occurred on 9/11/01.”

Samantha Ronson adds that “waking up in NYC this morning, seven years later … feels like just yesterday this city and our worlds were turned upside down.”

Sam Ronson recalls what it was like witnessing the attacks as she wrote: “Never in my lifetime had I ever believed that I would see such horror – the kind that you see in documentaries set in far off places and read about in text books. Never in my life had I ever thought that I would wake up and fall asleep afraid, watching things on television that felt like a film, walking through a city that felt like a war zone.”

Sam Ronson added: “There were army vehicles on Houston Street, barricades dividing neighborhoods and lines around the block of people waiting to donate blood — set in front of a backdrop of smoke, filling a space where two of the largest buildings once stood. Two buildings that shaped one of the most famous skylines in this country, or in the world… seven years later, and I will never forget.”

She also revealed: “I don’t really know what to say. To all those we lost, we will never forget, and never take for granted, the sacrifices that you made.”