After debuting a startlingly skinny figure in Hawaii last week, Lindsay Lohan defends herself against critics who feel she’s recently gotten too thin. 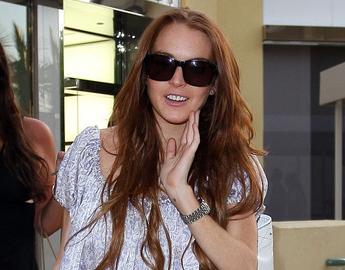 She revealed: “I’ve been eating enough.”

The star, who went through a very public breakup with DJ Samantha Ronson, 31, in April, also says that she used her time in Hawaii to relax with her family and get healthy after what was “a hard month.”

“We’re a tight family,” she continued. “We’ve been through a lot so we take care of each other… We went hiking and everything in Maui, so it was really good.”

Still, a source said that the 5’5″ actress showcased a skin-and-bones physique while on the island, adding that “I’ve never seen hipbones that stick out so much.”

In fact, a report confirmed that Lohan takes Adderall, a prescription drug usually given to people for attention deficit hyperactivity disorder, to lose weight.

“She takes Adderall all the time,” one source said. “She gets jittery because of the way the pills affect her. It’s a major reason why she’s losing weight.”

Instead of focusing on her frame, however, the actress reveals that she is close to signing on the a new film. Although she says she wants to keep the details of the movie deal confidential, she acknowledges that “it has a really good cast.”

Besides movies, she’s trying to relaunch her music career.

“Pharell, please call me back,” she shouts out to the music producer, who she’s hoping will agree to go back in the recording studio with her.

Any words for her ex, Ronson?

“We’re friends,” Lohan says, adding that the two are still “in touch.”