Lindsay was in sin city, Las Vegas to launch her new tanning line Sevin Nyne at Wet Republic yesterday but managed to turn the event into an early birthday pool party. 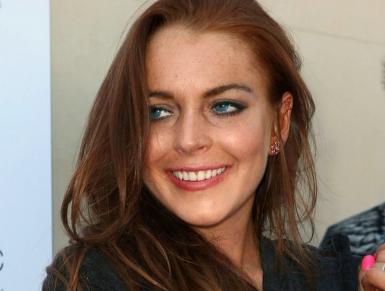 There was no sign of her on/off girlfriend Samantha Ronson although the turbulent couple are rumored to be back together after persistent chasing from Lindsay paid off. You could see Lindsay’s bikini picture here.

The troubled star looked like she had used the tanning mist on herself as she showed off a healthy glow in tiny embellished bikini bottoms that revealed her heavily freckled thighs.

Ms Lohan indulged in no less than five outfit changes during the celebrations. She started off in minuscule white denim, cut-off hot pants and an odd shaped top that looked to have been slashed to show off her stomach.

She teamed the look with towering, tasseled platform heels and a perfect pedicure.

As the star headed poolside she changed into a bandage-style red bikini and giant sunglasses.

The actress continued the celebrations in a cut out, black one-piece and blue denim hot pants to dance to Michael Jackson hits which her friend, DJ Akoi played in tribute.

She even took time out to eat some birthday cake.

After all the excitement Lindsay was spotted texting on her phone in black sequined 50s-style shorts and very revealing bikini top complete with gold spangle – could she had been secretly texting Samantha?

The fiery couple sparked rumors of a reunion earlier this month after being pictured flying out from London’s Heathrow Airport together.