Lindsay was seen drinking vodka the whole night at London’s Cuckoo nightclub on Swallow Street earlier this week. She was also overheard telling friends that she feels caged. 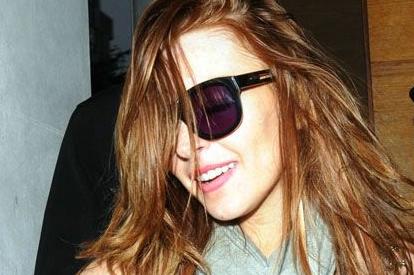 Sitting at a table Lindsay looked distraught and detached.

“I feel so, like, caged. Totally caged,” she told friends.

The disconcerting behavior continued when Lindsay visited the bathroom with her posse.

“She just wouldn’t stop saying she felt caged. She was just not all there and it really was like watching a broken girl in the middle of a complete breakdown,” a witness told the Mirror.

“She spent much of the night furiously texting Sam Ronson – and wasn’t best pleased about the texts she was getting.

“Everyone with her was actually very concerned about her. She seemed like a girl on the brink of self- destruction.”

Later the troubled actress was seen squirming around as if trying to hide in a ball on the floor.