Princess Beatrice usually photographed coming out of a nightclub or even attending the odd fashion show, but today she made some time for royalty’s favorite sport, a polo match. 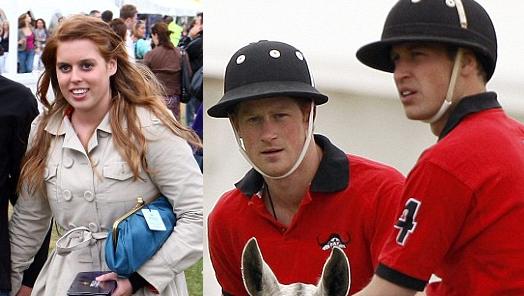 The 20-year-old royal and her boyfriend Dave Clark looked in high spirits as they attended the Polo In The Park Finals at London’s The Huntingham Club.

Dressed in a flattering beige mac and sensible black ballet pumps, Princess Beatrice was all-smiles as she walked hand-in-hand with her 24-year-old beau.

The bubbly Princess is not the first royal you would associate with the horse-playing sport.

Her cousin Zara is a talented equestrian and hopes to compete at the London Games in 2012.

While Beatrice remained a spectator, across town her other cousins, Princes William and Harry, were at the HAM Polo Club, although they were involved in the match.

Decked out in full polo-playing regalia, the princes looked in their element on the field.

Meanwhile, Princess Beatrice has started a summer job as a public relations officer at the Foreign Office – but turned up late on her first day.

She got stuck in a traffic jam in her chauffeur-driven car after an accident. Her car was not involved in the crash. Since then, Princess Beatrice has turned up on time at the Foreign and Commonwealth Office in Whitehall.

A source said: “Beatrice thought that rather than swanning around on holiday all summer, she would rather work at a thrusting Government department. She is thoroughly enjoying her work in Whitehall.”