She usually invites attention at every opportunity, but last night Lindsay Lohan was in no mood to be photographed. 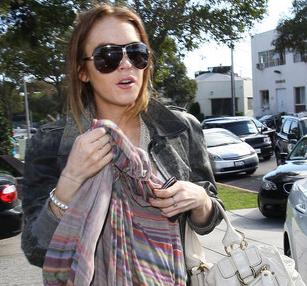 The wild-eyed Mean Girls actress hurled eggs at a paparazzo’s car after she spent the evening at Bardot nightclub in Hollywood.

It is the latest in a string of erratic behavior from the star whose relationship with Samantha Ronson came to a dramatic end two weeks ago.

It seems Lindsay’s moods are swinging from one extreme to the other – just hours after this incident she posted a good-humoured spoof singles ad on the Funny Or Die website that mocked her break-up.

Friends are said to be concerned about her mental state, but while admitting she is devastated by the split from Ronson, she has denied claims she is suicidal.