Lindsay Lohan has accused Sarah Palin of being a narrow-minded, attention-seeking and homophobic in her surprising criticism online after an issue with what they say is ‘Palin’s Desire to “save and convert the gays”‘ came out. 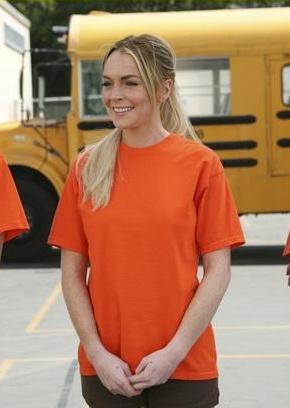 The “Freaky Friday” actress, who was rumored to have an intimate relationship with DJ gal pal Samantha Ronson, wrote: “According to this Associated Press story, the church of Alaska Governor Sarah Palin is hosting a kind of conference devoted to the “conversion of Gays” – no kidding.”

According to her myspace blog with a title: “Uh-oh”, the actress quote a story about Sarah Palin’s church reportedly promoting a conference promising to convert gays into heterosexuals through the power of prayer. She also thinks that the US vice president hopeful is unprepared for a job at the White House.

Lindsay Lohan wrote on her Myspace blog: “I really cannot bite my tongue anymore when it comes to Sarah Palin. I couldn’t be more supportive of a woman in office, but let’s face it, it comes down to the person, and their beliefs, male or female. I find it quite interesting that a woman who now is running to be second in command of the United States, only 4 years ago had aspirations to be a television anchor. Which is probably all she is qualified to be.”

The actress, who was seen busy while doing “Ugly Betty” scenes, seems particularly offended by Sarah’s alleged views on homosexuality as she wrote: “Is it a sin to be gay? Should it be a sin to be straight? Or to use birth control? Or to have sex before marriage? Or even to have a child out of wedlock? Is our country so divided that the Republicans best hope is a narrow minded, media obsessed homophobe? I know that the most important thing about this election is that people need to exercise their right to vote, regardless of their choice… I would have liked to have remained impartial, however I am afraid that the “lipstick on a pig” comments will overshadow the issues and the fact that I believe Barack Obama is the best choice, in this election, for president…”

It seems that Lindsay Lohan and Sam Ronson won’t be voting Republican in the election.

On Sam Ronson’s part, the DJ added: “I love this country- however i wasn’t born here and don’t have the right to vote- so i beg of you all to really do your research and be educated when you cast your vote this coming November’ and if you’re in doubt- vote for Obama! Mainly because if she gets elected my green card probably won’t get renewed!!!”