What’s new with Lindsay Lohan? The actress, who left the rehab, would be in a whole lot of trouble if California actually punished multiple DUI offenders with drug problems but as they doesn’t she will have a photo at a jail there soon where she will spend a few minutes. But where will her next photo be taken and will she wear clothes? 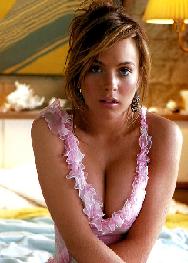 There are reports that Lindsay Lohan would be great Playboy bunny and he may have the ability to make it happen, according to a former lover of the actress.
According to a report, Brett Ratner, a director slash producer and former man-friend of Lindsay Lohan since the pair dated briefly in 2006, revealed that he would definitely cast the recently rehabilitated star in his upcoming film about Playboy founder Hugh Hefner.

The director revealed, “She’s very talented; she’d be great a as a Playboy bunny if she stayed sober.”