Lindsay Lohan is finally speaking at length about her relationship with celebrity DJ Samantha Ronson as she graced the cover of Harper’s Bazaar, which hits newsstands November 18. 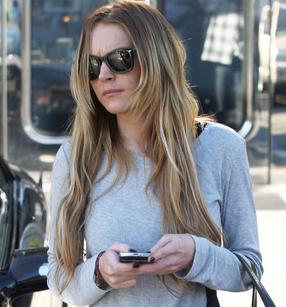 Though she first confirmed she and Samantha are a couple during a phone-in to syndicated radio show “Loveline” in late September, in a new cover story for the December issue of Harper’s Bazaar, Lindsay tackled the question again, revealing more about her feelings for the DJ.

The “Freaky Friday” actress revealed: “I think it’s pretty obvious who I’m seeing. I think it’s no shock to anyone that it’s been going on for quite some time… She’s a wonderful person and I love her very much.”

Lindsay, who recently wrapped up an abbreviated four-episode arc on “Ugly Betty,” told the magazine that her family, with the exception of her father Michael Lohan (who publicly criticized Samantha), has been supportive of her relationship.

And sister Ali Lohan, who originally denied to the press that Lindsay was in a homosexual relationship when rumors about the couple first surfaced, has also offered Lindsay her blessing.

Lindsay explained: “Ali’s known Samantha for a really long time. And she’s like, ‘Whatever it is, I support you. I probably won’t ever do what it is you’re doing, but I’m happy for you.’ Ali’s very mature. I’ve told her that it’s okay to like a boy or a girl if you’re comfortable with it and it’s something you believe you want to do. And I told her not to be afraid of who she wants to be.”

While Samantha is the first woman Lindsay has admitted to dating publicly, when asked if she had previously “been with a girl” by Harper’s, the actress replied, “I don’t know, maybe.”

Lindsay said she does not consider herself a lesbian, but as for whether she thinks of herself as bisexual, she told the magazine, “maybe.”

She also revealed: “I don’t want to classify myself. First of all, you never know what’s going to happen — tomorrow, in a month, a year from now, five years from now. I appreciate people, and it doesn’t matter who they are, and I feel blessed to be able to feel comfortable enough with myself that I can say that.”

The star of the upcoming film “Labor Pains” also said she plans to get married some day, though she doesn’t know whether it would be to a man or a woman. Lindsay also said she isn’t ready to talk children.

She said: “I don’t know if I could really set a time because then it’s like pressure to do it and failure if I don’t. It shouldn’t be about that. It should be about knowing that you’re ready. I still need to be in charge of taking care of myself and getting my sh** in line and buying a house.”

In fact, the 22-year-old admitted that prior to her 2007 rehab stints, she used up a lot of money while living at the Chateau Marmont hotel – money that could have gone to permanent digs, saying: “I was living here [at the Chateau] for almost two years. Who blows that much money on a hotel? I could have bought a house!”

Now however, with rehab behind her and her relationship with Samantha making her happy, Lindsay suggested she is on the right track.

She added: “Now I feel clear. That’s my past, and I’m a different person now. I have goals and I’m working to achieve them. I’m not hanging out with people who are out every night getting f***ed up. And… I think that I’m happy.”