Lindsay Lohan’s frame isn’t the only thing that’s fading — it seems her star status is too. 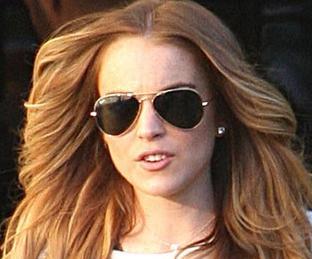 The 22-year-old caused chaos while departing on a Delta Flight from Tampa, Fla. on Saturday morning when the airline was unable to provide her with a first-class seat on the already overbooked flight.

According to an insider, passengers laughed as the starlet acted incredibly entitled (and embarrassed), stomped around and warned a friend traveling with her: “you’d better come and visit me back there in case I die.”

But fortunately for Lindsay, she didn’t have to suffer the life-threatening ill of business or economy class as she was eventually moved into first following her entertaining tantrum. Phew. However it seems as though the “Mean Girls” starlet is being plagued by even more problems in her personal life.

On Friday night, Lohan accompanied Samantha Ronson to ESPN The Magazine’s NEXT Pre-Super Bowl bash and the two apparently had yet another tiff. An angry-looking Lindsay hung out near Sam’s D.J. booth chain-smoking until the early hours while shooting her dirty looks.

According to an insider, Lohan continued to grab Ronson’s blackberry obsessively and check her messages before an inevitable feud broke out. The two later headed to the ladies’ to “sort it out” and came out smiling.

A source revealed: “They’re always breaking up. Samantha won’t let Lindsay go, she doesn’t have a career without her.”

And while the party peeps all enjoyed shots of Patron, the “reformed” rehabber made a public display of only drinking Red Bull, although word has it that a secret stash of liquor was later found underneath Lilo’s table … Is she going through a relapse?

A representative for the actress did not respond for comment.

Meanwhile, Lindsay Lohan was later spotted scurrying into the star-studded Maxim bash with Ronson and the Madden brothers and it was believed that Lindsay kept a bottle of Patron hidden beneath her VIP table.