Lindsay Lohan visited a milkshake parlour last night, where she mixed her own shake, named after the starlet. 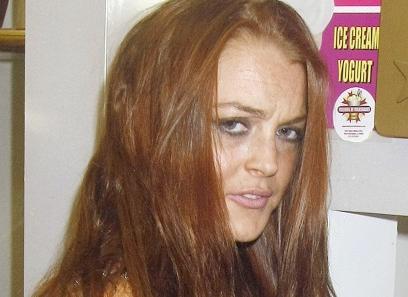 Sporting an apron, plastic gloves – and a serious case of ‘side-boob’ – Lindsay whipped up her own concoction in front of, literally, tens of fans.

The Lindsay Lohan milkshake will now appear on the menu at Millions of Milkshakes in West Hollywood.

LiLo follows in the footsteps of other ‘celebrities’ who have had shakes named after them, including reality TV stars Kim Kardashian, Heidi Montag and Spencer Pratt.

It’s not the first product that Lindsay has had a go at designing. She’s previously put her name to a fake tanning range and some leggings.

But a milkshake seems to be a new low for the Mean Girls star.

After a number of box-office flops, has Lindsay’s career finally hit rock bottom?

Her on-again-off-again relationship with DJ Samantha Ronson is also faltering, after the pair had a blazing row – ending in Sam throwing Lindsay’s clothes into the street – earlier this week.

We’re no experts, but if Lindsay thinks mixing a milkshake in a pretty dress will relaunch her ambitions to make it big, she’s being ‘udderly’ ridiculous.